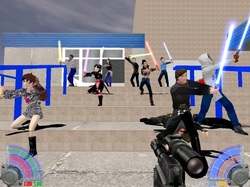 I started working on this map when I finished my 6th Form exams and was stuck at my boarding house waiting for my flight.
All my friends were leaving and I was super bored and my flight ticket was at the end of the term.
So I had more than a month or boredom.
I went around  the Haversham site and took photos here and there.
I saw dome fire escape plans and was able to build it from there.
Every single window in the game is breakable... that took a LONG time.
This project was a learning experience.

Every time I load this map up on my computer... I start to miss the place again, not because I liked the place that much but because I miss the people there. When you live in a boarding house for a long time and make friends there, everyone you like is just a few doors away... it becomes kinda like a family. So all my friends from Dallam, Paul, Daniel, Max, James, Soaps, Silvia, ETC you guys are still cool! :p